Since 2001, Macau Post has issued eight series of stamps titled “I Ching, Pa Kua”. I have in my collection series nos five to seven. These stamps commemorate the Chinese philosophy of Taoism.

The I-Ching is also known as "The Book of Changes" and is vaguely dated to being 5000 years old. The I-Ching is commonly considered as the basis for China's major philosophies such as Confucianism, Taoism and Zen.

The basis of the I-Ching are the Trigrams which in turn gave birth to the Hexagrams, hence the hexagonal shape of the stamps.  The Trigrams are the Yin and Yang lines that surround the Pa-kua symbol arranged in eight combinations of three lines. Pa-kua philosophy analyzes even the simplest elements as having three parts: An egg consists of three parts, the shell, the white and the yoke; an apple incorporates three parts, the peel, the fruit and the pits. Even the skin itself has three layers. This is the concept of SKY MAN EARTH, which is a recurring classification in Pa-kua studies. Doubling the eight combinations of Sky Man and Earth lines of the Trigrams attained the sixty-four Hexagrams, hence the eight series of sheets of eight stamps each. The I-Ching is an explanation of these sixty four Hexagrams. 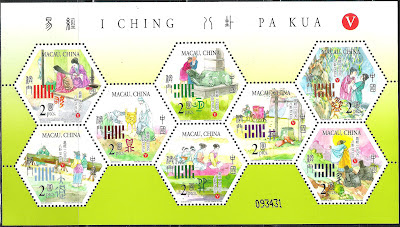 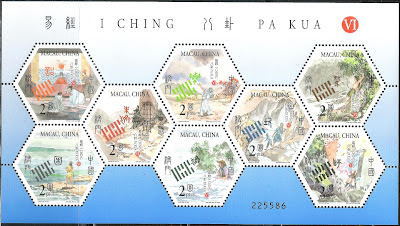 The sixth series of stamps titled as “Conquer the Disaster” was issued on 1 March 2008, and symbolized “Song, Kun, Wei Ji, Jie, Huan, Kan, Meng and Shi”. 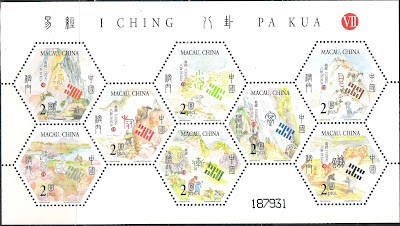 The seventh series of stamps titled as “Reach a Peak” was issued on 1 March 2010, and symbolized “Dun, Xian, Lü, Xiao Guo, Jian, Jiang, Gen and Qian”.

I can't wait to have the rest of the five missing sheets of the series in my collection.

Do feel free to add your thoughts, comments or suggestions
NOTE: Please click on the images for a larger view / closer look.

Posted by Vivin Fernandes at 6:29 PM

Vivin Fernandes
#604, Tapovan Terraces, 28/C, Industrial Suburb, Vishweshwaranagar, 3rd Stage, Mysore - 570008, Karnataka, India
This love of stamps and all else related has got me to share my collection of stamps and covers through this blog. I will try to post here my entire collection that comprises India commemoratives 1947 till date, definitives & miniature sheets, all of GB 1937 through 2000, christmas and odd shapes thematic and a general world wide countries collection. As I build my collection my immediate interests are all of Australia, the rest of GB till date, all of Canada and USA. I have also recently started collecting covers, postcards and Maxim cards addressed to me. If you would like an exchange, please send me a cover / postcard with multiple commemorative stamps on it from your country and I will send back a similar cover / postcard from India.

I would love to receive covers. My favourite topics are Christmas, Odd shaped / Unusual and Cartoons / Comics / Animations stamps. Covers from all over the world are welcome. I don't mind receiving covers from countries that I already have covers of. So please feel free to send 'em across. A prompt reply is assured.